My grandfather, Wiley Litteral, served in the U.S. Navy from 1921-1953.  As was tradition in those days, all sailors of Irish heritage not on combat duty received the day off for Saint Patrick’s Day. As such, he always volunteered to be Irish.  Part of me wonders if he would be slightly disappointed to know just how Irish we really are, as in its not as much fun if your not getting away with something.

As descendants of John Litteral (abt1790-1840) we are also descendants of James Luttrell, often referred to now as “the immigrant”, who landed in Maryland about 1671/72 and promptly established himself in Virginia.  While we’ll discuss James further in a later post, its important to know that he (which means we) came from a long line of Luttrells from what some refer to as the “Irish Branch” of the family.  Since the reign of King John, the Luttrells had been a significant part of the English Pale and the government in Ireland.  John had sent Sir Geoffrey De Lotrial as a minister to Dublin in 1204 and by 1210 A.D. he had been granted the lands of Luttrellstown, about 8 miles from Dublin then. 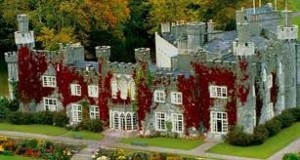 It is not clear rather the Irish Luttrells descend from Sir Geoffrey’s son or brother but the Luttrells, loved or hated, were a fixture of Irish history from the middle ages until the dawn of the 19th century.

James Luttrell, the immigrant, was the great grandson of the progeny of a second marriage, which meant the children of the first marriage inherited the castle, lands and titles.  By the time James came to America, he did it the old fashioned way: by indentured servitude.  While Luttrell’s from the wealthier, inherited branches did eventually immigrate, James’ grandchildren were already Virginia landholders by the time they did.

Being distanced from the rest of the family in Ireland wasn’t necessarily a bad thing.  A contemporary, Col. Henry Luttrell (1655-1717) was assassinated in Dublin after supposedly making an enemy of the locals. Later, in 1798, Henry’s grandson, Henry Lawes Luttrell, 2nd Earl of Carhampton, served as Adjudant General of Ireland and was instrumental in putting down the Irish Rebellion of 1798.  He was so hated by the populace that a mob broke open his grandfather’s tomb and bashed the corpse’s skull.  You got to make someone pretty mad in order for them to dig up your relative that had been dead 80 years and mutilate the corpse.

The name in America went from Luttrell to Littrell, Literal and Litteral following the American Revolution. I had always assumed it was because of illiteracy but maybe it was intentional considering what was happening with the Luttrell’s back home.

So, if you are a Litteral and find yourself celebrating in an Irish pub tonight, be sure to raise your Guiness or Whiskey at the proper toasts, wear your green socks or what have you but, depending on your company, you might want to maybe reconsider telling your name, just in case.